Popular Charleston radio personality, Richard “Box” Bachschmidt, is bringing his personal flair and signature blue hair to the Internet airwaves with a new live streaming radio show called “Box in the Morning.” Known locally as Charleston’s Morning Mayor, Box will launch his new radio show from the offices of TRIO, a Mount Pleasant-based marketing communications agency on Monday, April 30. The “Box in the Morning” show will air live daily Monday through Friday at www.boxinthemorning.com from 6 to 10 a.m. Shows will be recorded and available as podcasts after each show. 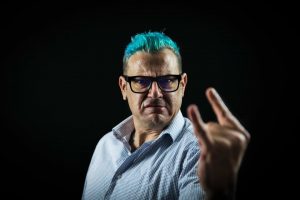 After more than 15 years as a radio personality on stations across the Charleston-metro area, most recently with The Bridge 105.5 and 98Rock, Box decided to chart his own radio journey and make the most of his brand. With his own show, he will be able to create a morning show where he can master the program, music and conversation.

The “Box in the Morning” show lineup will feature interviews with local musicians, restaurateurs, artists, celebrities, and entrepreneurs, as well as a variety of movers and shakers within the Lowcountry. Conversations with Box will take place in his studio located at 505 Belle Hall Parkway in Mount Pleasant.

“As the concept for my show came together and the excitement began to build, I knew I needed to find a home base and I didn’t want to settle for a closet in the back of some old warehouse,” said Box. “After stopping by for a visit with my friends at TRIO, we started to toss around the idea of moving in together and decided it could be a really cool experience so here we are.”

“Box has become a memorable Charleston icon,” said Jenny Dennis, TRIO’s chief operating officer. “Being a creative agency that focuses on brands, we knew this collaboration would be a dynamic mash-up, kind of like Slayer meets Taylor Swift. When you think about it that way, how could we possibly pass up being a part of this journey?”

Before his new show’s air date, Box will host an official launch party on April 26 at Theatre 99, featuring improv by Theatre 99’s Brandy Sullivan and Greg Tavares and stand-up comedy from Jason Groce. The show starts at 8 p.m. and tickets are available for $10.

While the two businesses will share workspace, both Box in the Morning and TRIO will remain separate businesses, operating independently.

TRIO Welcomes Box in the Morning was last modified: March 15th, 2019 by TRIO

By TRIO
By Stephanie Barrow
Relationship & CreateAthon Manager
By TRIO